As indicated yesterday, I'm going to take a short break from the eDevs...

However, we also have a chapter-a-day Bible-reading challenge going on in the congregation. 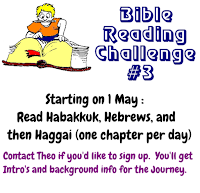 Currently we're on Hebrews (today was chapter 3).
I send out an intro to the book and every few days a little update... This is all done on WhatsApp rather than email...

I've pasted the Hebrews and Habbakuk notes below...

We'll do the intro to Hebrews in stages...

AUTHOR
We don't know who the author is. One of the most popular theories is that there is a man named Apollos who we find in the book of Acts. He has a Greek name (which probably meant he had a Greek dad and a Jewish mom) and he was well-versed in the Old Testament which helped him debate with the Jews and prove that Jesus was the Messiah. This would explain the strong Old Testament flavour of the book and  the knowledge of obscure characters like Melchizedek. (More on him later...)

Date
We think it's written before the destruction of the Jerusalem temple in 70AD because he talks about the sacrifice system in the temple in present and not past tense.

The Audience isn't specified but from the clues we see they were probably Jewish and were starting to experience persecution.

Main Theme
The theme of book, quite simply, is :
Jesus is greater
- than Moses
- than angels
- than the high priest
- than all the Old Testament rituals

In chapter 1 we'll encounter Jesus as Son of God, but also as Son of Man (humanity.) And that he is greater than angels...

I'll send more background as we go along.

In ch.1 we saw Jesus portrayed as the Son of God and greater than angels. I love that He is God's "Final Word" - He is all we need.

In ch.2  we see that humankind is the apex of God's creation and so, to heal creation, Jesus becomes human so that He can die in our place. I love the idea that He can help us when we are tempted because He was tempted too (but overcame).

(Ch.3...) But in His humanity, Jesus loses nothing of His deity. For Christians with a Jewish heritage there was no one greater than Moses, the lawgiver and Exodus leader. But Moses is a servant whereas Jesus is the Son. I love the line that Jesus is greater as the builder is greater than the house.

Chapters 2 and 3 are bracketed by warnings not to neglect, ignore or rebel against such a great salvation.

Tomorrow is chapter 4 (read to end of v.13) which explores the whole idea of the Sabbath which had become of optimum importance to the Jews and how they portrayed their uniqueness. Also when Moses led the exodus out of Egypt,  they saw Canaan (the land of milk and honey) as their "Sabbath rest", but they failed God and worshipped idols. So the Hebrews writer uses Sabbath to talk about Heaven...

Hope you're enjoying the journey.

The book of Habakkuk deals with the problem of theodicy – a big word that literally means "the justice of God." Theodicy wrestles with the question "How can God, who is surely almighty, righteous and just, allow the righteous to suffer and the wicked to prosper?"

We don't know much about the prophet Habakkuk. He lived at the same time as Jeremiah - just before Babylon attacked Jerusalem and took the first batch of exiles to Babylon. His name could mean "to wrestle or embrace" (or little vegetable!😂)

The book is in three parts (which don't fit neatly into the chapters unfortunately…).

PART 1:  Habbakuk's first complaint and God's answer (1:1-11) Habbakuk asks "Why does God let evil flourish, especially among his own people?" God's  answer is that the Babylonians will be His "rod of correction" This is how God works in the history of nations. When a nation becomes corrupt they will fall at the hands of another.

PART 2: Habbakuk's second complaint and God's answer (1:12-2:20)
Habbakuk is horrified by God's answer. How can a righteous God use the pagan Babylonians who are even more evil than the Israelites? He argues that the Babylonians are intoxicated by their love of power.

Then comes the HEART of the book:  Habbakuk goes out onto the ramparts of Jerusalem's defences where he waits for God's answer. (Imagine a storm brewing, and him pacing up and down waiting for God's answer) But before He responds to Habbakuk's complaint, God makes two important points:

1. We don't always get instant explanations when we wrestle with tough questions. Perspective sometimes only comes after a period of waiting and searching.
2. We should not be too quick to demand answers as though we deserve them. Sometimes we have to walk by faith. We have to trust even when we don't understand.

Then God shows how Babylon's arrogance will also be dealt with. He tells Habbakuk that He will deal with Babylon's sins and that they will ultimately be punished. There are five "woes" and each of them deals with a facet of human brokenness.

PART 3: Habbakuk's prayer song.  The song reflects on God's deliverance in the past:
- God coming from Teman and Paran (Exodus)
- God rescuing the tents of Cushan (A scene from Judges)

Habbakuk uses the language of Theophany (God's displays of power in nature – probably a thunderstorm that Habbakuk experienced on the ramparts...) He uses the image of the storm to describe His ultimate majesty and victory. It points out that God frustrates the wicked -  often piercing him with his own spear like David did to Goliath.

His belief in God's power silences Habbakuk's earlier protests and he comes to a place of awestruck wonder and the book ends with a beautiful declaration of faith and trust in God.

There are four lessons to learn:
• It's OK to struggle with pain in the world.
• We have to learn to wait for God: 2:1-3
• God is still and ultimately in control.
• We can put our trust in Him and He will empower us.

I suggest you read as follows: